A New Paper "Maser Emission from Gravitational States on Isolated Neutron Stars" by Nikita Tepliakov, Tatiana Vovk, Ivan Rukhlenko, and Yuri Rozhdestvensky has been recently accepted to The Astrophysical Journal (with a 2016 Impact Factor of 5.533). Nikita Tepliakov and Tatiana Vovk are the fourth-year bachelor students and Yuri Rozhdestvensky is a professor with the Department of Optical Physics and Modern Natural Science. This paper is a unique demonstration of the high cross-disciplinary nature of research conducted at Modeling and Design of Nanostructures Laboratory headed by Dr Ivan Rukhlenko.

Despite the years of research on neutron stars, the source of their radio emission is still under debate. In our new paper "Maser Emission from Gravitational States on Isolated Neutron Stars" we propose a new coherent mechanism of pulsar radio emission based on transitions between gravitational states of electrons confined above the pulsar atmosphere. Our mechanism assumes that the coherent radiation is generated upon the electric and magnetic dipole transitions of electrons falling onto the polar caps of the pulsar, and predicts that this radiation occurs at radio frequencies - in full agreement with the observed emission spectra. We show that while the linearly polarized electric dipole radiation propagates parallel to the neutron star surface and has a fan-shape angular spectrum, the magnetic dipole emission comes from the magnetic poles of the pulsar in the form of two narrow beams and is elliptically polarized due to the spin-orbit coupling of electrons confined by the magnetic eld. By explaining the main observables of the pulsar radio emission, the proposed mechanism indicates that gravitational quantum con nement plays an essential role in the physics of neutron stars.

The accepted version of the paper can be downloaded at the bottom of this page.

Figure 1. (a) Formation of electronic gravitational states above the neutron star atmosphere. Purple arrows indicate the two ways in which electrons can appear above the polarized surface of the pulsar: they can come down along the magnetic field lines or be thermally emitted from the atmosphere. (b) Confining potential formed by the gravitation attraction to the pulsar and an infinite potential wall at the edge of the EDL. Inset shows the first six gravitational levels, the electronic probability densities of three of which (with n = 1, 2, and 3) are shown by red curves. 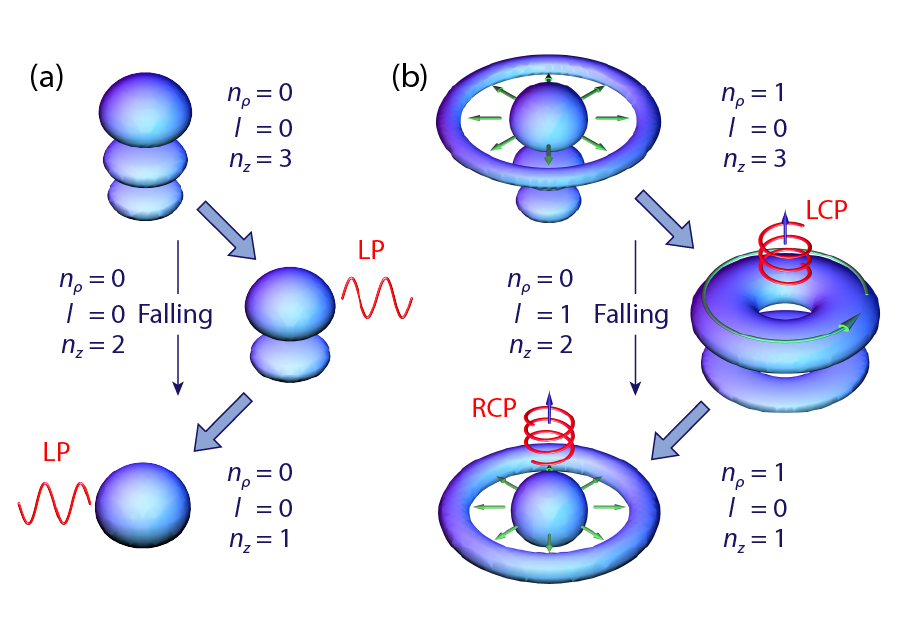