Leading scientists of the International Institute of Photonics and Optoinformatics made presentations at the largest international forum «IRMMW-THz 2018». 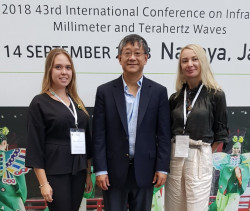 Leading scientists of the International Institute of Photonics and Optoinformatics of ITMO University took part in the 43rd international conference on infrared, millimeter and terahertz waves «IRMMW-THz 2018», which was held from 9 to 14 September in Nagoya, Japan.

This conference dates back to 1974 and is the best known largest continuous forum specifically dedicated to the field of microwave electronics and applications. The conference venue alternates between Europe, Asia and America in a three-year cycle. Every year the conference gathers more than five hundred participants from all over the world.

Year by year the interest to the conference only grows, the geography and the number of its participants expands. This year the conference was attended by about 800 people with 392 oral and 335 poster presentations. 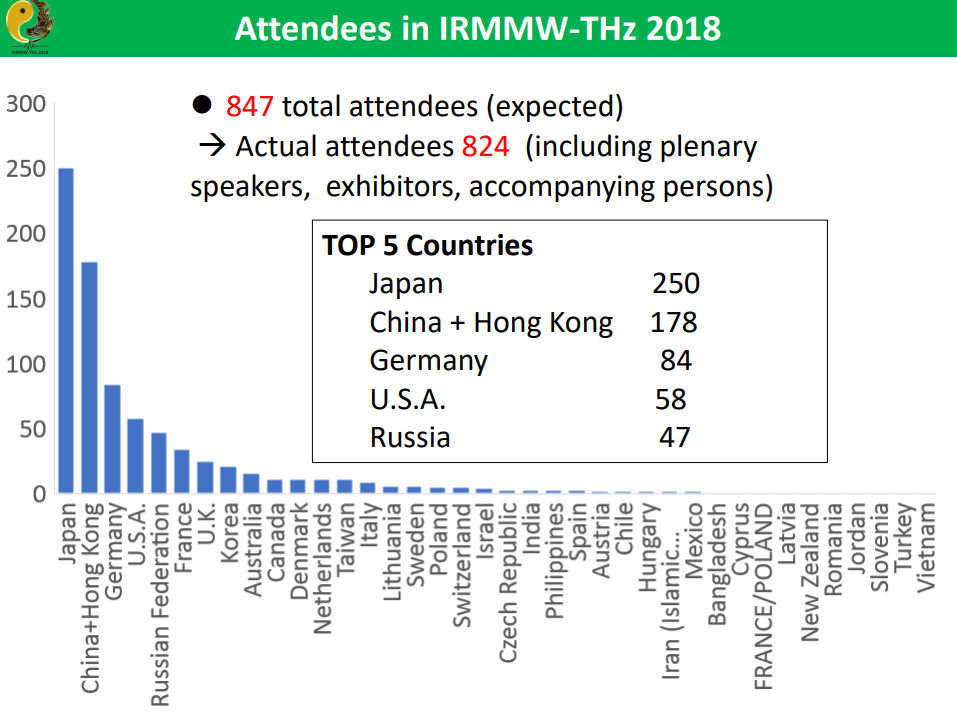 In the terahertz frequency region there is a huge number of spectral features of substances, the energy of terahertz quanta corresponds to rotational transitions of molecules, vibrational modes of organic compounds, lattice vibrations in solids, intra-zone transitions in semiconductors and energy cracks in superconductors. Due to its penetrating power and high informative response, terahertz radiation has great potential for applications in diagnostics, remote sensing, spectroscopy of chemical and biological objects. Features of penetration of such radiation through the smoke, clothing, packaging, wood, plastic, ceramics and other materials offer ample opportunities for terahertz location, tomography and IntraVision with high resolution. 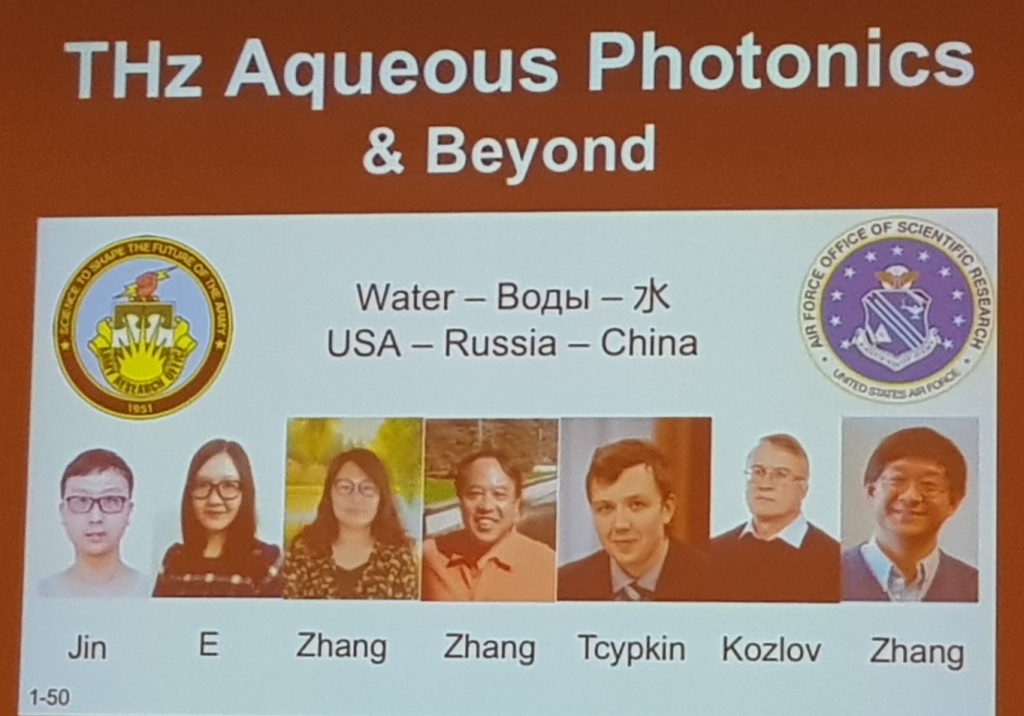 Terahertz devices of remote non-destructive testing will allow to equip, for example, points of control of passengers and Luggage at the airports, railway and bus stations. Remote sensing of mail is essential for security, and the scale is determined by the total volume of mail. Moreover, the use of terahertz technology to detect hidden explosive devices is of great importance for counter-terrorism tasks. It is very important to develop high-speed digital communication channels, as compared to modern technologies, such as Wi-Fi or mobile networks of the third generation, relying on the gigahertz frequency range, the use of terahertz range will increase the speed of data transmission by 1000 times, as well as open new communication frequencies.

The conference «IRMMW-THz 2018» was opened by Professor XI Cheng Zhang - Professor of the University of Rochester and scientific Director of the international Institute "Photonics and Optoinformatics" of ITMO University. In his plenary report "THz aquatic Photonics and Beyond", Professor Zhang spoke about the joint work carried out by him with the staff of the international laboratory of Femtosecond optics and femtotechnology in the breakthrough direction - generation of terahertz radiation from liquids. 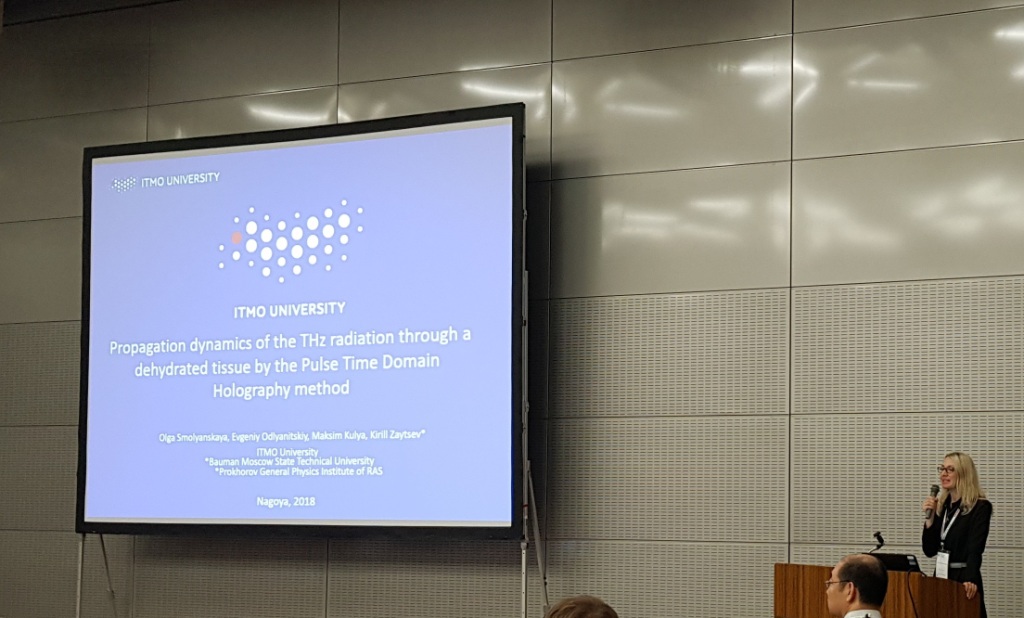 Olga Smolyanskaya, head of the international laboratory of "Femtomedicine" at ITMO University, associate Professor of the faculty of Photonics and Optoinformatics, made an oral presentation at the conference on the development of new ways to increase the transmission of biological tissues in the terahertz frequency range and methods of image formation using pulsed holography with time resolution.

The poster report of Maria Zhukova, a graduate student of the faculty of Photonics and Optoinformatics, was devoted to the study of the properties of materials used for the generation and detection of terahertz radiation, both in the infrared and THz frequency ranges, which helps to increase the efficiency of terahertz spectroscopy systems. 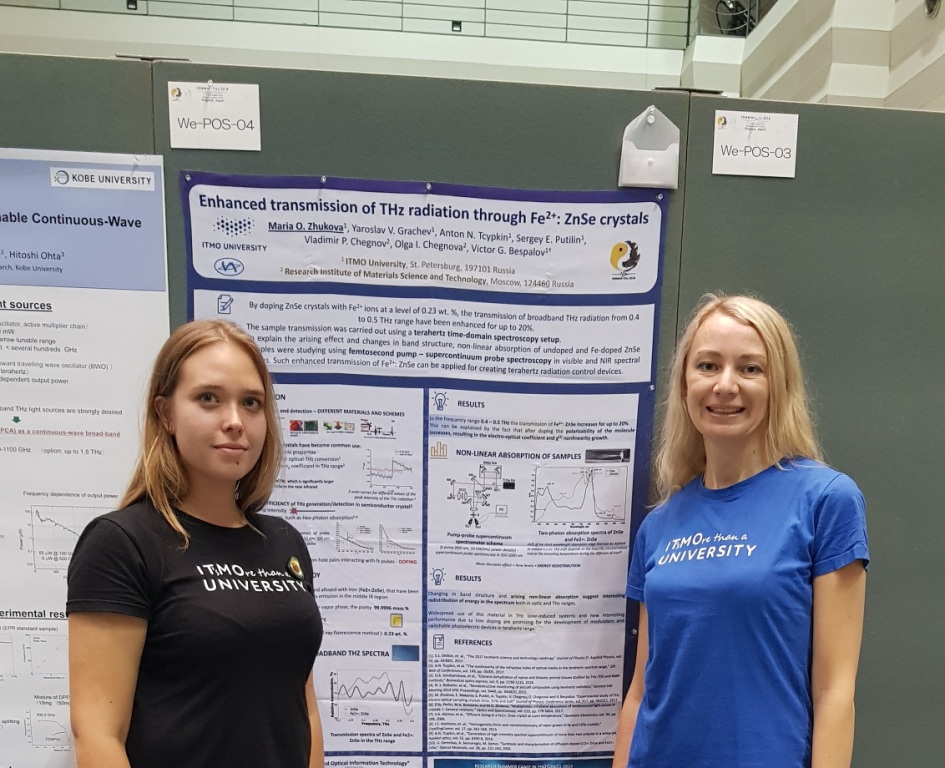