Scientists of the International Institute «Photonics and optical information technology» of the ITMO University participate in «SPIE Photonics Asia-2018».

The largest international conference of Asia on optics and Photonics «SPIE Photonics Asia-2018» was held in Beijing (China), October 11-13.

SPIE society is a professional non-profit international Association of scientists, engineers and students in the field of optics and Photonics. It was founded on July 1, 1955 and was officially called «Society of Photographic Instrumentation Engineers». Then, in 1964, the official name of the society became «Society of Photo-Optical Instrumentation Engineers (SPIE)».

Today SPIE society unites more than 18.7 thousand members from different parts of the globe. SPIE's mission and vision is to collaborate with researchers, educators, students and the industry to advance research in photonic technologies to improve the quality of human life. And one of the main activities of SPIE is the organization and sponsorship of major technical forums and exhibitions around the World: in North America, Europe, Asia and the South Pacific. Among the most famous conferences: «SPIE Photonics West», «SPIE Photonics Europe», «SPIE Photonics Asia», «SPIE Optics + Photonics».

«SPIE» conferences are important events in the life of the world scientific community and everyone who is interested in the latest developments and achievements in the field of scientific and industrial photonics. These large – scale events cover the most important areas of photonic technologies-from digital optics to quantum and attosecond technologies. The conferences serve as a unique platform for active dialogue between outstanding scientists from all over the world, a platform for scientific communication and exchange of experience through plenary sessions, listening to speeches of invited, oral and poster speakers. And, of course, taking into account the relevance and importance of the «SPIE» conference the International Institute of «Photonics and optical information technology» of the ITMO University strives to be their permanent participant, and regularly presents the works of its leading scientists.

Thus, at the conference «SPIE Photonics Europe – 2018», which was held in spring in Strasbourg (France), the International Institute of «Photonics and optical information technology» was represented by the head of the international laboratory «Digital and visual holography» Nikolai Petrov and graduate student Vladimir Borisov.

The conference «SPIE Photonics Asia-2018» was attended by a group of scientists of the International Institute «Photonics and optical information technology» leaded by its head, Professor Sergei А. Kozlov. The head of the international laboratory of «Femtosecond optics and femtotechnologies» Anton Tcypkin and the PhD student Maksim Melnik presented their scientific works at the conference. 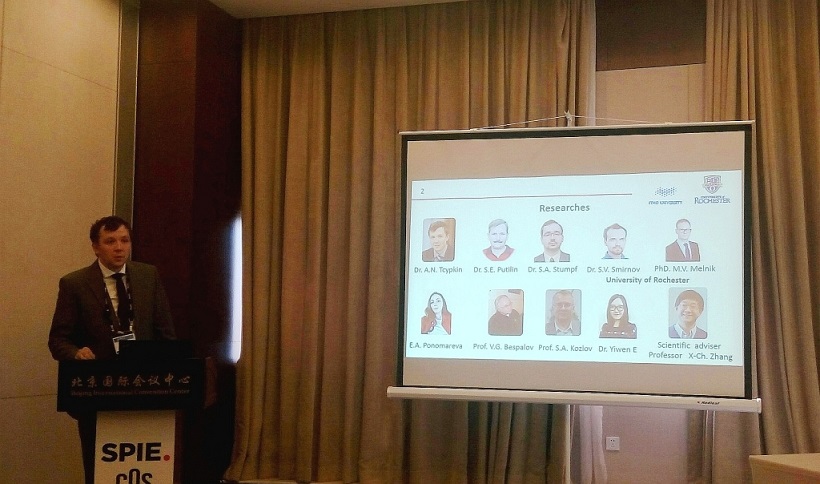 Anton Tcypkin had  oral report «Pulse duration dependence of terahertz generation in water and ethanol mixtures», where he presented theoretical measurement and numerical simulation of the terahertz radiation depending on duration of the optical excitation pulses. «For a certain thickness of the jet, there is an optimal pulse duration, which most effectively generates terahertz radiation. The greater the thickness of the jet, the longer the optical pulse should be. It is shown that the optimal parameters also depend on the type of liquid used. In this work, we derived the theory of the generation of terahertz radiation in liquids, shown and described the effect of the absorption medium and the coefficient of ionization».

Maksim Melnik had poster presentation «Features of few-cycle THz pulses nonlinear refraction». Maksim presented a study of the applicability of the Z-scan method for determining the nonlinear refractive index for pulses in the field of low-period waves and to evaluate the nonlinear properties of media in the THz frequency range. «As a result of comparison of the known theoretical model and numerical simulation of the Z-scanning method for pulses of different durations, it is shown that the thickness of the medium under study is the determining factor that imposes restrictions on the applicability of low-period pulses for the calculation of the nonlinear refractive index». 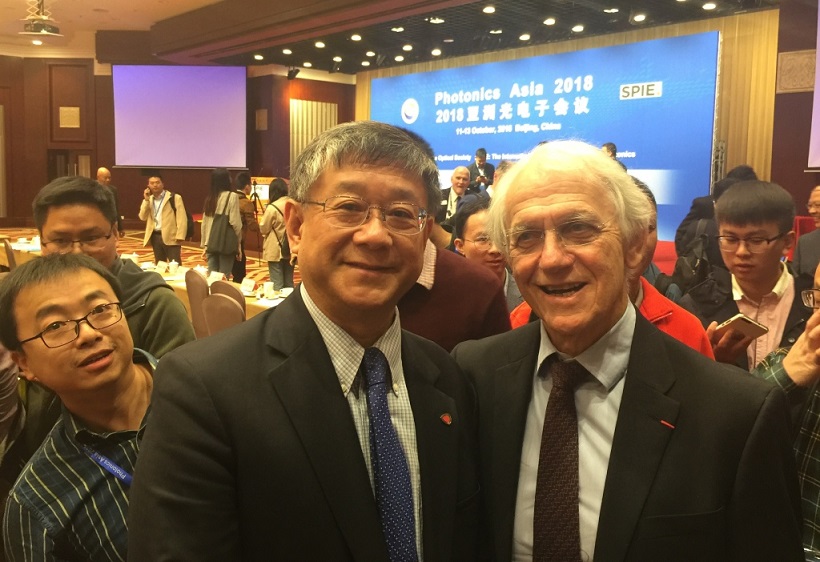 The conference «SPIE Photonics Asia-2018» brought together an unprecedented number of participants (more than 2000 people came to Beijing) and became a kind of unique event for the entire world scientific community, both in scale and quality of scientific reports. And the special significance of this forum was given by the fact that it was attended and made a plenary report by the Nobel prize winner of 2018 in physics, Professor Gerard Mourou.