Research is the work of my dreams! 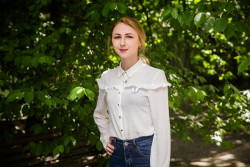 Evgeniya Ponomareva, the graduate student of the Photonics and Optoinformatics Department, winner of the university contest “Student of the Year-2019” in the nomination - the best in scientific and technical creativity, put wise concerning her scientific work and shared her study experience in Finland.

In January 2020, Evgeniya began classes at Aalto University (Finland) under the semester exchange program. Unfortunately, due to the Сoronavirus epidemic in March, Evgeniya had to return to St. Petersburg. Here she was gladly met by her colleagues in the laboratory of Femtosecond Optics and Femtotechnologies and was involved in the performance of a new assignment for a scientific project. But nobody canceled his studies in Aalto, and Evgeniya continues to study under the program of the Finnish University, but already distantly. In May, four exams and two projects will be required.

Therefore, now, despite difficult times, she has to work, paradoxically, twice as hard as before. But Evgeniya’s difficulties are not afraid, because once she made her most important professional choice:

'Scientific affairs are the work of my dreams!'

Watch the video made by Zhenya, and you will also fall in love with science.